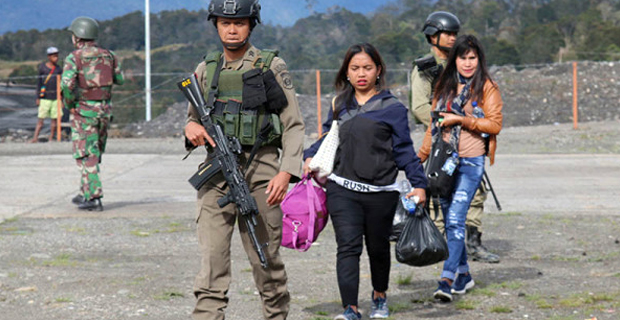 Over 11,500 people have fled from Wamena Town in West Papua after clashes.

It comes as violence continues to rock Papua and West Papua provinces, where dozens have died during clashes. Radio New Zealand reports that an official with the country's social ministry says the air force flew around 7,500 people out of Wamena after the unrest there in the past month.

A police spokesperson said the situation in Wamena is now stable, with shops and markets re-opening.

Suva Grammar School have taken out the boys and girls division titles of the Coca-Cola Suva Zone 2 athletics meet. The Grammar boys finished with 28 gold, 24 silver and 15 bronze. 11 days ago

Words matter, especially from a Minister, and these words were inappropriate according to the Director of Public Prosecutions Christopher Pryde while ... 11 days ago

The Rams Cleaning Services / All Freight Logistics Suva retains the Digicel Fiji FACT after beating 4R Electrical Labasa 2-0 in the final at Lawaqa Park. 13 days ago
More In Depth

The driver who allegedly caused an accident this morning is on the run while 5 people are currently admitted in a stable condition at the Navua Hospit... 8 hours ago
LATEST NEWS

More than 100 ginger farmers are being encouraged to transition from subsistence farming to sustainable, commercial farming following the first Fiji ... 8 hours ago

A lot of people in Fiji do not plan or worry about retirement but whether you like it or not, everybody will retire one day. This has been ... 8 hours ago

The search continues for missing 90-year-old, Ram Jas Sharma of Waibogi Settlement in Sigatoka who has been reported missing at the Sigatoka Police ... 9 hours ago

30 youths will now become income generators for their families after completing a three-day training on Mobile Skills Training on screen printing ... 9 hours ago

If you have been a victim of robbery or burglary and have items such as laptops, phones, boxes of milk and batteries stolen then you can call police ... 9 hours ago
More News
TOP