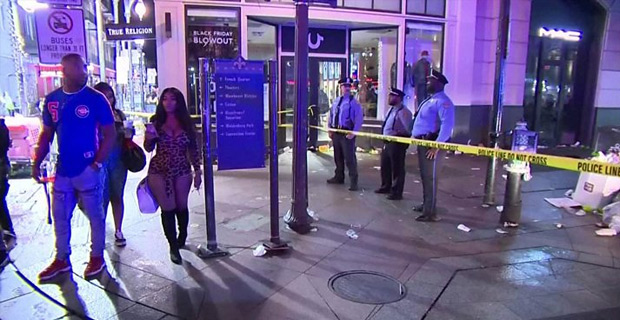 Police in New Orleans say there have been 11 victims of a shooting incident near the French Quarter tourist hub.

Two people are in critical condition.

11 people were shot near Canal Street in the French Quarter of New Orleans.

We shouldn't have to wake up on a #SundayMorning to this news.

But politicians in the pocket of the NRA have to WAKE UP and demand gun control NOW. #EnoughIsEnough
https://t.co/Mow09mDh0G

No fatalities have been reported.

BBC News reports one suspect was apprehended near the scene.

Police there say the person's possible involvement was still under investigation and that no arrests had yet been made.

BREAKING: 10 have been shot in downtown New Orleans. Two of them are critically hurt.
Police say a group of officers were nearby when the shooting began...and they thought they were under attack.
They detained one person but it's not clear if he or she was involved. @abc7chicago pic.twitter.com/hWPkfHRyFE

No other details have been given.

The victims have all been taken to the hospital.

Video footage from the scene showed numerous police vehicles cordoning off the area as forensic teams made checks.

Prime Minister Voreqe Bainimarama says he will never accept the idea that even one family or one person is left behind in the modern ... 46 minutes ago

Minister for Commerce Trade, Tourism and Transport, Faiyaz Koya says he has been informed that the Maritime Safety Authority of Fiji has taken ... 50 minutes ago

FICAC has confirmed that investigations are continuing in the cases where eight Housing Authority of Fiji former employees were allegedly involved in ... 51 minutes ago