10 women died last year due to domestic violence in Fiji

10 women died last year due to domestic violence in Fiji 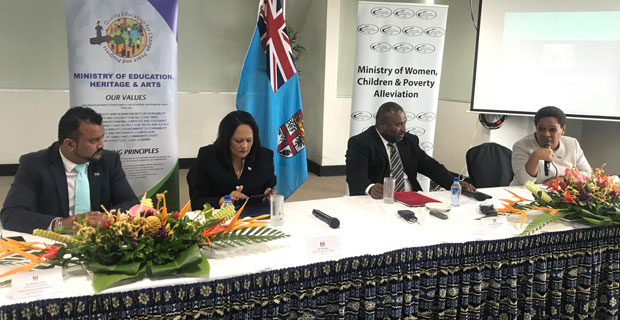 10 women died last year due to domestic violence in Fiji.

While speaking at the announcement of Fiji’s National Plan to Prevent Violence against Women and Girls, Minister for Women, Children and Poverty Alleviation, Mereseini Vuniwaqa says the prevalence of violence against women and girls in Fiji is amongst the highest in the world.

Vuniwaqa says this is a national crisis.

She says that most times the perpetrators are the intimate partners.

The Minister says with this plan that they are launching, one of their goals is to help eliminate violence against women and girls.

Meanwhile, Minister for Education, Rosy Akbar says we maybe churning out the best of the best professionals through our education system; however the role of education is never going to be fully fulfilled if we fail to raise men and boys who respect women and girls.

Akbar says we owe this to our daughters, sons, grandchildren and generations to come.

While speaking at the launch of the Fiji National Action Plan to Prevent Violence Against Women and Girls, Akbar says this can be achieved by enabling prevention programs to be delivered in a context and settings where respectful, non violent, healthy peer and gender-equitable relationships can be normalised.

Akbar further says she believes that many of the life skills in violence prevention, such as respectful communication, managing emotions, resolving conflicts and solving problems are the same skills that can help children succeed in school and that can protect against other issues that affect learning, such as alcohol and drug use.

The Minister says education has been giving a voice to women and girls in Fiji and has evidently played a hugely important role in their long term empowerment.

She adds education has a significant role to play in transforming the root causes of violence against women and girls- gender inequality and patriarchy.

She further says while education can be life-changing, it can reinforce deep rooted gender stereotypes and inequalities.

The Minister says while the free education scheme from the Fijian Government creates equal opportunities for girls and boys to get a proper education, it is critical that the issue of gender inequality is better addressed through our education settings.

Akbar says education opens doors to knowledge, opportunity and empowerment like nothing else adding however, the access of women and girls to education comes with its own challenges.

She says there are still many barriers to learning and professional attainments that are specific to girls and women.

The Minister also talked about her childhood where she witnessed her mother being a victim of domestic violence.

She says her mother was trying her best for her kids, to save her marriage and to give her children a normal childhood, to avoid societal shame and being judged by the community.

Akbar says domestic violence scarred the childhood of the siblings and her.

CCTV cameras will soon be installed in locations around Nausori Town to help Police deal with growing concerns about the increasing number of criminal... 58 minutes ago
LATEST NEWS

Fiji’s seasoned diplomat and former Minister for Foreign Affairs, Ratu Inoke Kubuabola has been nominated as Fiji’s candidate for the position of ... 5 minutes ago

A 19-year-old woman will give evidence in her uncle’s rape trial which will begin next Wednesday. Suva High Court Judge Justice Salesi Temo was ... 55 minutes ago