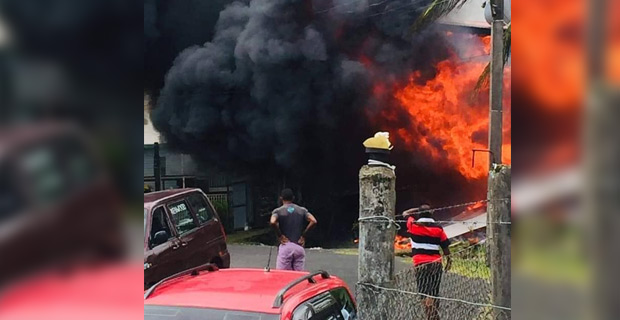 About ten people are homeless after a fire destroyed two houses at Kavika Place in Nakasi yesterday afternoon.

According eyewitnesses, the fire started from the single storey house and spread to the double-storey house.

Five people were in the single-storey house when the fire started but there are no reports of injuries or casualties.

The owner of the single storey house, Edwin Sen says the fire may have started from a technical fault.

He says he was in the shower when the fire started and contacted the NFA at around 2.45pm.

Ten people were arrested for breaching the nationwide curfew from 10 o’clock last night to 5 o’clock this morning with one suspect possibly ... 37 minutes ago

A Police officer has been charged with Failure to Comply with Orders after allegedly breaching the curfew over the weekend. During the curfew ... 39 minutes ago

Police in the US are struggling to control arson, damage, and looting following the death of George Floyd in Police custody. In the video footage, ... 52 minutes ago