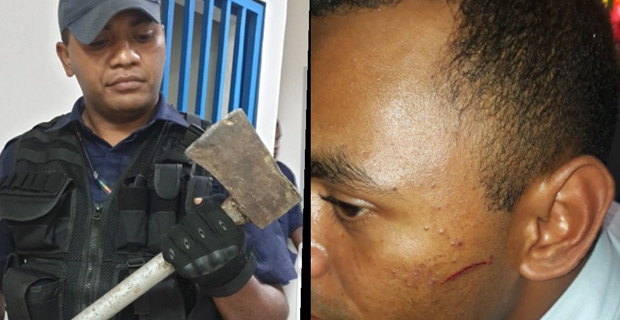 A vigorous warning is being sent out by Acting Police Commissioner Rusiate Tudravu after three more Police Officers were threatened and attacked in separate incidents in the last 24 hours.

Tudravu is extremely disappointed as these incidents have happened only weeks after they laid to rest Police Constable Siuta Niumataiwalu who was stabbed to death while responding to a case of theft in Lautoka.

He stresses if people want to do the crime then be man enough to face the consequences.

The latest incident occurred after 3 o'clock this morning where a man entered the Cunningham Community Police Post and allegedly attacked the Police Constable on duty with an axe.

A quick response from the Valelevu Taskforce team led to the arrest of the man and he is currently in custody at the Valelevu Police Station.

The Police Constable was unharmed during the incident.

Tudravu says this is part and parcel of the life of a Police Officer as they were responding to an assistance call by the wife of the suspect who was drunk.

A taxi driver is also in police custody for allegedly threatening a Police Officer who booked him for illegal parking along Duabale Road in Sigatoka.

Police say out of frustration the taxi driver allegedly told the Police Officer that the killing of the late Police Constable Siuta Niumataiwalu last month in Lautoka can also happen to him in Sigatoka.

The taxi driver also told the officer that he better watch out.

He was then arrested.

Tudravu says it is sad that comments of that nature were made by the taxi driver.

A man also allegedly assaulted a Police Officer during an arrest at Vuci Road and is in custody at the Nakasi Police Station.

The suspect was brought in for an alleged case of drugs and while being searched tried to escape.

As the Police Officer stopped him, the man allegedly assaulted the officer and caused injuries to his face.

The Acting Permanent Secretary for Health, Dr. James Fong will hold a press conference at 3 o’clock this afternoon in relation to COVID-19. Stay wit... 41 minutes ago
LATEST NEWS