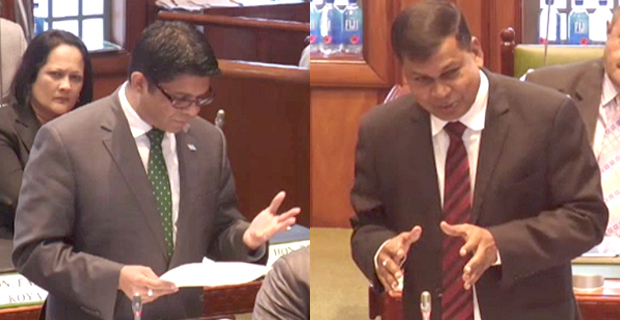 The Minister for Economy and Attorney General Aiyaz Sayed-Khaiyum says that the claims made by the Leader of NFP, Professor Biman Prasad that certain media organizations get directives from Qorvis to only cover stories in favour of the government and against the opposition are complete and utter nonsense.

This was after there was heated exchange in parliament as a motion to decrease the budget allocation for Qorvis Communications was moved by the Opposition.

$1 million has been allocated for services from Qorvis Communications which is an international public relations, advertising, media relations and crisis communications firm.

While moving the motion during the Committee of Supply for the 2017/2018 National Budget, Professor Prasad said the government does not need Qorvis Communications.

Attorney General Aiyaz Sayed‑Khaiyum then told Biman Prasad to stop speculating about Qorvis. He then went on to say that Prasad is having coffee with those at Motibhais, the owners of The Fiji Times Limited.

Meanwhile Motibhai Group of Companies has said in a statement that it disagrees with the comments made by the Minister for Economy in parliament.

The company says they have an iconic restaurant named ZigZag Café which is attached to their flagship Prouds Store in Nadi and people from all walks of life come to the restaurant on a daily basis.

It says as a customer service, people from Motibhai Group often have tea or coffee with customers who walk into the store in Nadi.

The statement also says that the Fiji Times newsroom operates independently without any influence from its owners ‑ Motibhai Group.

When asked about the issue by Fijivillage, Biman Prasad maintained that they do not want Qorvis.

Fijivillage then told Prasad that our newsroom does not get any directives from Qorvis to only cover stories in favour of the government and against the opposition.

Prasad says it is only for certain media organizations but he did not say which media outlets.