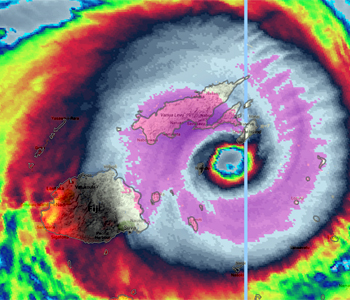 Tropical Cyclone Winston continues to strengthen as the eye of the cyclone makes its way between Viti Levu and Vanua Levu.

The eye of the category 5 cyclone, was located 175 kilometres North East of Suva earlier this afternoon.

Winds have intensified in a number of areas in Viti Levu and Vanua Levu.

We have been getting reports from a number of residents in Savusavu and Nabouwalu that they are getting the full brunt of Cyclone Winston.

Please be advised that very destructive winds will begin several hours before the cyclone centre passes overhead or nearby.

A heavy rain warning is also in force.

On this track, the cyclone is expected to be located about 65 kilometres South East of Yasawa-i-Rara or about 80 kilometres North East of Nadi at 1am tomorrow.

Stay with us as we will bring you continuous weather updates on Tropical Cyclone Winston.

At least 10 families are currently stranded at the Daria post office in Wainunu, Bua after they left their houses fearing that the roofs would be blown away by strong winds.

They have been at the post office for two hours now.

Sathu Nair says there is no evacuation centre near the area and flood waters are starting to rise.

The nearest evacuation centre is the Yadua Community hall which is about 20 kilometres from their location.

He is asking people who are close to the area to help them.

There are also reports of flooding in some other areas in Bua.

Seven houses in Waiyevo village in Taveuni have being badly damaged by strong winds.

Five of these houses had their roof tops blown away and the affected families are now sheltering at the Waiyevo community hall.

A total of seven evacuation centers have been opened in Taveuni and there are fifteen families sheltering at Holy Cross Primary School while three families are at the Tavuki village Hall.

These families also had their houses damaged this morning.

Savusavu and nearby settlements have also been experiencing destructive hurricane force winds since about 9 o’clock this morning.

Many residents have told us that they are still experiencing severe winds in Savusavu and Nabouwalu.

People can call 9908947 for assistance for the Northern Division.

Four DISMAC teams are on stand-by to provide assistance.

Vocea says the water level at the Labasa River has increased.

He says many power lines are broken and they have received information that some houses are damaged.

The eye of the cyclone is just near Savusavu at this point however the system is so large that it is now covering the whole Viti Levu, Vanua Levu, Taveuni, Lomaiviti, Ovalau, Kadavu and parts of Lau.

Those living in the low‑lying areas are advised to move to higher ground.

The National Disaster Management Office has opened all its 758 evacuation centres around the country.

Please make your assessment now and move to a safe shelter if you believe that you could get affected later this afternoon into tonight. Do not leave things to the last minute.

During cyclones, there are water and power cuts.

A resident in Vanuabalavu spoke to Legend FM News via a satellite phone from Nabavatu and said that some houses were badly damaged early this morning and people rushed to other houses to seek shelter.

She said that her house which was one of the most significant structures on the island was destroyed early this morning.

She has termed Tropical Cyclone Winston as a terrible monster. It is not a system that many people in Fiji are familiar with as it is a large system with very destructive winds and a lot of rain.

There is also confirmation that three houses in Tubou village in Lakeba had their rooftops blown away by strong winds this morning.

Four other houses in the village were badly damaged.

National Disaster Management Office Director Akapusi Tuifagalele says the Emergency Committee is currently meeting to discuss ways to effectively accommodate the needs of the people that have been affected by Cyclone Winston so far.

Tuifagalele says due to the current weather condition, people in Vanuabalavu and the nearby islands cannot be reached at this stage.

Meanwhile, he says police and the military will be supervising all evacuation centres in the country to ensure the safety of everyone at the centres.

The historic Super W win by the Rooster Chicken sponsored Fijiana Drua sets the platform for the Fijiana 15s side as they will play in the Women’s ... 30 days ago

A group of people have come from Nadroumai Village in Nadroga to support Swire Shipping Fijian Drua centre Kalaveti Ravouvou against the Chiefs in ... 3 hours ago

Model, Meresiana Vatavesi from Ba who took part in her first Fiji Fashion Week last night says she is following in the footsteps of her sister, Sera ... 3 hours ago

After six weeks of testimony from Johnny Depp and Amber Heard’s legal teams, both sides have delivered their arguments today, and jury ... 4 hours ago

About 600 people back at work as Sheraton Fiji opens after undergoing $78.9 million refurbishment

About 600 people are now back at work after the opening of Sheraton Fiji Golf and Beach Resort in Denarau. The Resort has been closed since ... 4 hours ago
More News
TOP