The fight needs to go on - Ratu Epeli Nailatikau

The fight needs to go on - Ratu Epeli Nailatikau 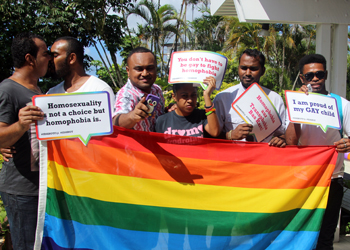 The fight against homophobia and transphobia needs to continue in Fiji.

Former President Ratu Epeli Nailatikau says our constitution covers for the rights of everyone in the country however the fight against discrimination has to go on.

Ratu Epeli made these comments to Fijivillage as he attended the celebration to mark International Day Against Homophobia and Transphobia at the French Ambassador’s residence today.

French Ambassador Michel Djokovic says today people all over the world try to raise awareness against homophobia and transphobia, and try to put an end to such an undignified attitude.

He says the French Embassy in Fiji is very supportive of the trans-women and homosexuals fight for their rights.

The event was attended by members of the lesbian, gay, bisexual, transgender, intersex and queer community.

The Fijian constitution states that a person must not be unfairly discriminated against, directly or indirectly, on the grounds of his or her actual or supposed personal characteristics or circumstances, including race, culture, ethnic or social origin, color, place of origin, sex, gender, sexual orientation, gender identity and expression.

A number of organizations including UN Women, Fiji Human Rights and Anti-Discrimination Commission, the Drodrolagi Movement and Rainbow Pride Foundation are having a panel discussion this afternoon to raise awareness on International Day Against Homophobia and Transphobia with a focus on mental health and wellbeing.

Josua Vakurunabili was too strong for the England defence as he scored two tries to help the Fiji Airways Men’s national 7s team beat England 36-10 ... 60 minutes ago
LATEST NEWS

The State Councilor and Minister of Foreign Affairs of the People’s Republic of China Wang Yi met with the Secretary General of the Pacific Islands ... 5 hours ago

Rako Pasefika was the crowd favourite during the finale of the 15th Fiji Fashion Week show as more than 20 singers and dancers got the opportunity to ... 6 hours ago

The search is underway for two men who stormed a neighbourhood shop at Buca Settlement near the Savusavu Airport on Thursday night. Those men were ... 6 hours ago

All 25 villages of Ovalau including Levuka Town have committed to managing their terrestrial, freshwater, coastal and marine ecosystems ... 11 hours ago

1,200 deaths due to tobacco use each year in Fiji

Each year, Fiji records more than 1,200 deaths due to tobacco use and exposure to second-hand smoke. That's according to Assistant Minister for ... 11 hours ago
More News
TOP