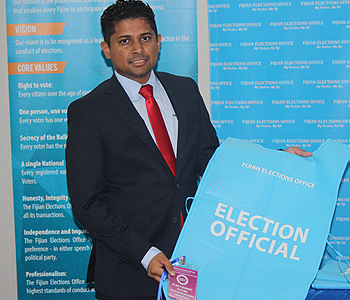 Supervisor of Elections Mohammed Saneem shows the Electronic Voter Registration Card and the bib which the Fijian Elections Office staff will always carry.

Supervisor of Elections Mohammed Saneem has today revealed that they have received information that some people are impersonating Fijian Elections Office staff and are taking voter details from people.

While making an announcement on the next major voter registration drive, Saneem says they have received this information from members of the public.

Saneem says Fijian Elections Office staff will always carry the Electronic Voter Registration Official identification card and will have a signature of the Supervisor of Elections.

Some will also have Elections Office Staff Identifications cards.

Saneem says in the case of Paula Maraivalu and FICAC, the High Court has upheld the Magistrate’s initial sentence of two years imprisonment handed to Maraivalu for the charge of impersonation of an elections official.

He calls on people not to enter into such behaviour as the sentence is quite harsh.

Meanwhile the Fijian Elections Office will commence its nation-wide Voter Registration Drive from the 22nd of May to 1st of July this year.

Supervisor of Elections Mohammed Saneem says this year’s national drive will also include the annual nation-wide school registration and it will also incorporate the display of the National Register Voters with data as at 20th of March, 2017.

The usual voter services such as voter registration, replacement of voter cards, amendment or correction of details, change of polling venue or simple upgrade to Voter Card 2.0 will be provided at all the temporary booths to be set up by the Fijian Elections Office.

Officials will be visiting different parts of the country to provide these services.

Voters are required by law to inform the Elections Office of changes in the residential address within 21 days.

Saneem says for new registrations, they will require a birth certificate and a valid photo ID.

If you do not have a photo ID, the Fijian Elections Office will require another voter to verify that you are the person you allude to be.

You can also advise the Elections Office at this time about a voter who has passed.

The oldest registered voter on their system in Fiji is 108 years old and she was born on 1st of January 1909. Fijian Broadcasting Corporation Chair, Ajay Bhai Amrit stresses the former CEO, Riyaz Sayed-Khaiyum had a total package for the year of $387,790.08 an... 9 hours ago
LATEST NEWS

Beyoncé has broken the record for the most Grammy Award wins of all time, after collecting her 32nd trophy at this year's ceremony. The singer ... 9 hours ago

The Naboro Landfill has received 1,295,651 tonnes of waste since its inception in August 2005 to December last year, and the tonnage of waste landing ... 9 hours ago

Colonial War Memorial Hospital, Board of Visitors Chair, Dr Esther Williams has stated they are having a Clean Up Day on Saturday, February ... 9 hours ago

Beyoncé is the top nominee for the 65th annual Grammy Awards, with all but one of her nine nods coming for her dance-heavy album ... 13 hours ago

Fiji's discussions in India will be focused on advancing India-Fiji economic relations and bilateral cooperation in areas of mutual strategic ... 13 hours ago
More News
TOP