PM speaks about the increasing misuse of social media

PM speaks about the increasing misuse of social media 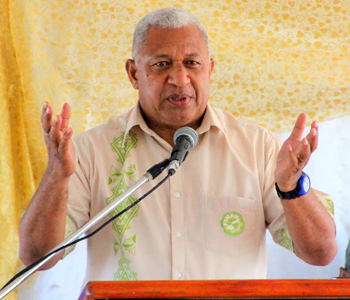 Prime Minister, Voreqe Bainimarama has spoken about the increasing misuse of social media by people to create division along ethnic and religious lines and he has called on people to shame and expose the cyber thugs for creating disunity.

While opening the USP Open Day today, Bainimarama said everyone needs to make a personal commitment to work together – as one nation, one people – if we are to fulfill our destiny.

He said this means standing up more than ever for ethnic and religious understanding, the cornerstones of any successful nation.

Bainimarama said it also means drowning out the voices of division with a chorus of unity and goodwill.

The Prime Minister said there is a lot of targeted abuse of innocent people on ethnic or religious grounds on social media.

He says social media such as Facebook and Twitter can be a powerful force for good, in keeping people connected and for the exchange of information and ideas.

Bainimarama encourages people to use it as a means of bringing people together.

But he said unfortunately, there are some individuals and groups roaming cyberspace who are trying to stir up hatred against their fellow Fijians on ethnic or religious grounds.

Bainimarama then asked people to do all they can to expose such people.

He said people should confront these messages of hate and their threats of violence.

The Prime Minister said some of these trolls and cyber thugs either act anonymously or steal other people’s identities by setting up false accounts.

Bainimarama said everyone who uses social media should be alert and do what they can to shame these cyber thugs.

The Prime Minister stressed that it is not a question of threatening free speech.

Bainimarama said political criticism is perfectly acceptable and is an important part of our democracy.

He encourages this but he said inciting hatred against someone because of their ethnicity or their religion is a crime under Fijian law and the laws of many other countries, including our bigger neighbours.

Bainimarama said it cannot be justified nor should it be allowed.

He said freedom of expression is a vital component of any democracy and is, in fact, guaranteed in the Constitution.

However the Prime Minister stressed that it is not an absolute right.

Bainimarama said with freedom comes responsibility, a responsibility to keep the society cohesive and protect the rights of every citizen.

A new study of the Fiji National Provident Fund by the International Transport Workers Federation has recommended an urgent independent review and ... 7 hours ago

A new record has been set by Aminiasi Tavailagi of Ratu Kadavulevu School in the Sub Junior Boys Long Jump, and he has also qualified for the 100 ... 7 hours ago

A tough tussle is expected in the Senior Girls 100 metres final tomorrow as Mahatma Gandhi Memorial School’s Kesaia Boletanakadavu and Saint ... 7 hours ago