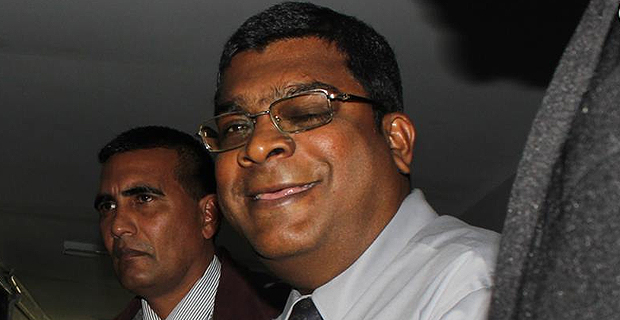 Prime Minister Voreqe Bainimarama has said in a statement that he received the letter from Dr. Mahendra Reddy yesterday.

In letter to the Prime Minister, Dr Reddy has written that in order to preserve the reputation of Government, he wishes to step aside by resigning while the charges laid by FICAC against him are heard.

Dr Reddy says this is a private matter and he needs to clear his name without causing a distraction from the great work the FijiFirst Government is doing for the Fijian people.

Bainimarama says in accordance with the Constitution, he has accepted the resignation by Dr. Mahendra Reddy as the Minister for Education, Heritage and Arts.

The Prime Minister says he will announce the appointment of an Acting Minister for Education, Heritage and Arts in due course.

Bainimarama says until the charges laid by FICAC are determined by the court, Dr. Mahendra Reddy shall remain as a Member of Parliament.

The President of the University of the South Pacific Staff Association, Elizabeth Fong says they have received confirmation that USP Vice-Chancellor, ... 27 days ago

Tropical Cyclone Ana was upgraded to a Category 3 system on February 1st. 31 days ago

Substance abuse including marijuana cases are on the rise amongst students in schools during the COVID-19 period, and urgent action is required. 70 days ago
More In Depth

International travel, pick up in tourism activity locally and revenue support by govt in budget can help in economic recovery - RBF

The Reserve Bank of Fiji says resumption of international travel and the pick-up in tourism activity locally, along with the level of revenue support ... 6 hours ago
LATEST NEWS

There are four new border quarantine cases of COVID-19 in Fiji. The first two cases are a 42-year-old woman and a 35-year-old man who arrived in ... 5 hours ago

61 families in Nakavika village will no longer need to travel to Suva or to Namosi Secondary School to access internet services after Vodafone Fiji ... 5 hours ago

Nadi-based band Ouvacast is determined to keep pushing through despite the dire financial situation being faced by many people in the Western ... 5 hours ago

There is some good news for a mother of four who is suffering from a rare kidney disease as she can now afford to pay for her treatment for up to ... 5 hours ago

Job vacancies continue to decline, govt revenue down by $557 million compared to last year while govt debt is $6.86 billion

Fiji is continuing to grapple with the economic downturn and effects of COVID-19 as the latest Reserve Bank of Fiji economic review says job ... 6 hours ago
More News
TOP