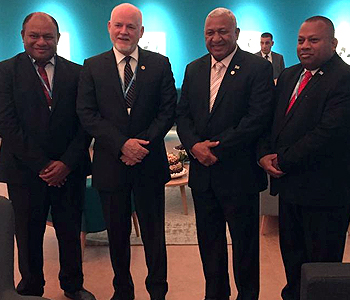 Prime Minister Voreqe Bainimarama has formally invited US President-Elect Donald Trump to Fiji to see the effects of climate change in our country.

While speaking at the high level Conference of the Parties 22 in Morocco, Bainimarama said that he formally invites President‑Elect Trump to Fiji and promised him the warmest of welcomes.

Bainimarama says Fiji will show Trump how we are already having to move entire communities out of the way of the rising seas.

He says Trump can also meet the families of the 44 Fijians who were killed last February by the biggest tropical cyclone ever to make landfall in the southern hemisphere.

Bainimarama made a special appeal to Donald Trump for a personal change of heart and a public change of policy on the issue of climate change.

He says that Trump has said that he does not believe that climate change is man‑made and he intends, as US President, to cut off America's contribution to the global effort to reduce carbon emissions.

Bainimarama says he is especially alarmed by reports that Trump intends to withdraw from the Paris Agreement, which would be disastrous for every person on earth.

He has appealed to Trump to show the leadership that the rest of the world expects the United States to take on this issue.

Bainimarama has urged Trump to take another look at the overwhelming scientific consensus on the man‑made effects of global warming.

Bainimarama says to Trump - "Please come as a matter of urgency to see for yourself the devastating impact that rising sea levels and extreme weather events are already having on our people and our way of life."

He says we have made a strong start with the Paris Agreement and we especially welcome the rapid entry into force of that agreement, which Fiji led by becoming the first nation in the world to lodge its ratification instruments.

But Bainimarama says it is not enough as he urges the global community to go even further than the Paris commitment to keep global temperatures "well below two degrees Celsius" above the temperature of the world in the pre‑industrial age.

The Pacific nations B under the Suva Declaration B are pressing for a fresh cap of 1.5 degrees Celsius.

Bainimarama says it is becoming increasingly clear from recent scientific evidence that even that may be too high.

The Prime Minister says the world looks to America for leadership as we work together to confront this challenge to our survival and the wellbeing of our planet.

Bainimarama has appealed Trump for humanity's sake, to show that leadership and to join the common cause.