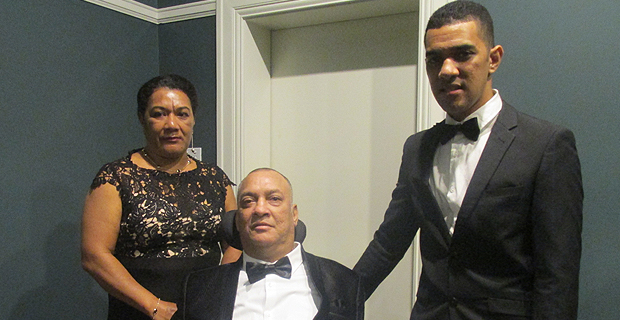 Kula McGoon with her family.

A total of 216 people have been assisted and continue to be assisted by Viti Spinal Cord Injury Association of Fiji.

This was revealed by Viti Spinal Cord Injury Association of Fiji at their Old Skool Ball fundraiser last night.

Association Secretary Kula McGoon says that from last year’s fundraiser they raised close to $30,000 and were able to assist more than 10 people that had spinal cord injuries.

She says the money raised is used to assist in providing a bit more comfort to those with Spinal Cord Injuries and their carers.

McGoon says that with this year’s fundraising they have already marked out four major projects of which one is to build a new house for 30-year-old Spinal Cord injury patient Sefanaia Kotobalavu.

She says with the project of this kind they hope to raise over $60,000 during the fundraiser.

Meanwhile items that were on auction included travel, holidays, restaurants, and sports memorabilia including an All Blacks jersey signed and donated by Richie McCaw, and other memorabilia from Eric Rush.

Internationally acclaimed New Zealand actor Temuera Morrison who was the special guest and main speaker at the Viti Spinal Injuries Association of Fiji Old Skool Ball also brought a Ukuklele that was signed by Dwayne ‘The Rock’ Johnson and Auli'i Cravalho who was the voice the title character in Disney’s Moana that was auctioned for $1,700.

All the proceeds from the Viti Spinal Injuries Association of Fiji Old Skool Ball is used to assist in primarily improving the quality of life for people affected by Spinal Injuries.

More than 2,000 marijuana plants were uprooted from three farms in Kadavu this week. The first raid was conducted at Lavidi Village where more than... 46 minutes ago
LATEST NEWS

Prime Minister Voreqe Bainimarama says Fiji stands ready to serve its community of nations in every way it can, by way of peacekeeping and way of ... 50 minutes ago

The Fiji Women's Crisis Centre has received 751 reports of violence against women and children for the first seven months of this year. It says ... 6 hours ago

The Emmy Awards are a celebration of televisions best and brightest, but 2020’s ceremony was marked by its focus on politics and social justice ... 7 hours ago

A 16-year-old girl is one of 18 people arrested from 11 o'clock last night to 4 o'clock this morning for allegedly breaching curfew restrictions. ... 8 hours ago
More News
TOP